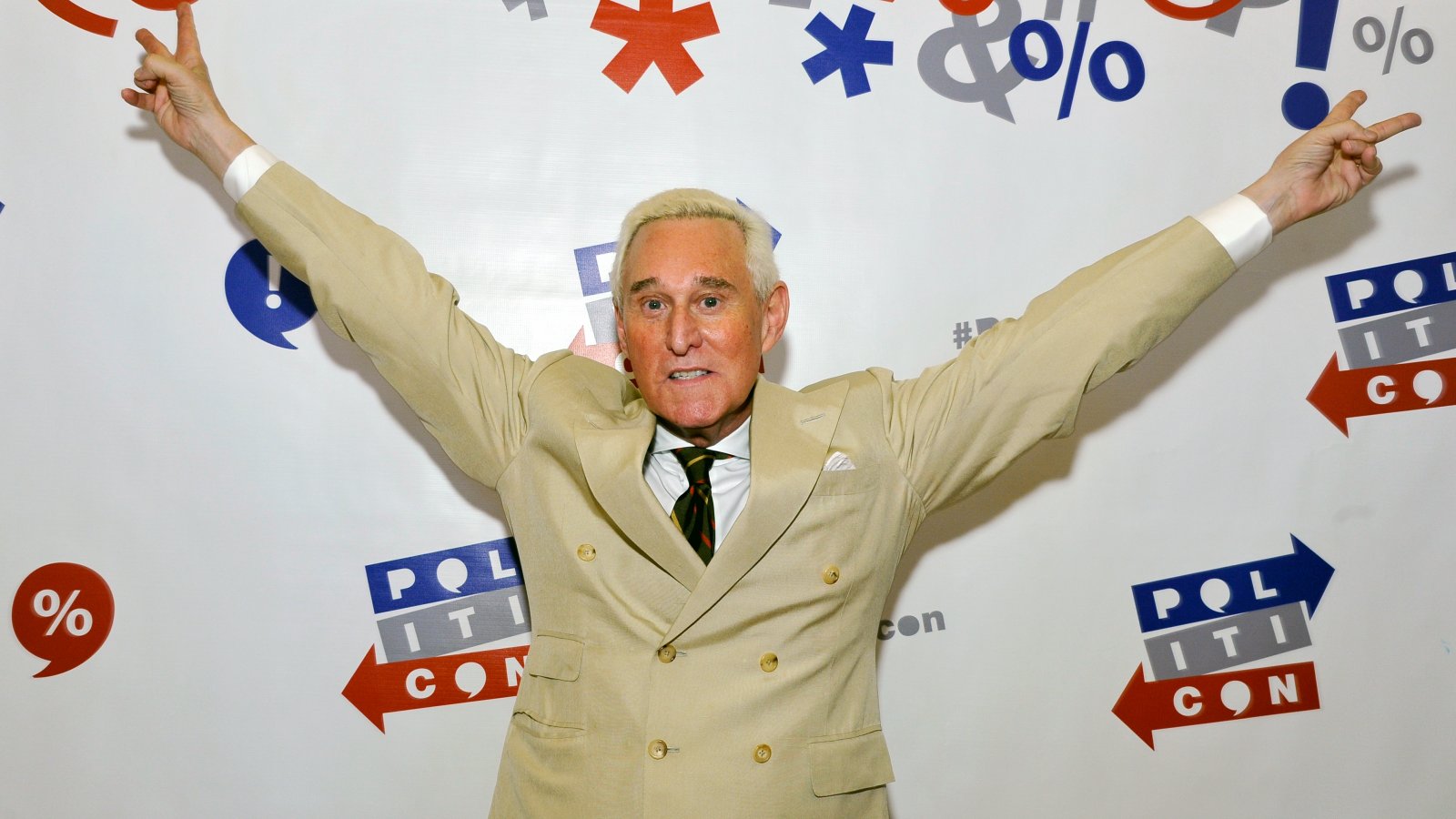 UPDATE 2: Roger Stone's arraignment will take place at 11am Tuesday in Washington, DC before Magistrate Judge Deborah Robinson. Stone will plead not guilty.

Stone said he plans to fight the charges in court, describing himself as falsely accused and the investigation as “politically motivated.”

UPDATE: Stone speaks outside the courthouse, at times drowned out by boos and shouts of "lock him up." Stone says he is innocent, will fight the charges, and will not testify against the president. He admits he is one of the president's oldest friends and a fervent supporter.

Stone says he "categorically" did not work with the Russians to aid President Trump. The New York Times has the full transcript of Stone's remarks.

After the early morning arrest at his home, he appeared briefly in federal court in Fort Lauderdale, Fla., wearing a blue polo shirt, jeans, and steel shackles on his wrists and ankles. The judge ordered him released on a $250,000 bond.

Speaking before a raucous crowd outside the courthouse, Stone vowed to fight the case.

“I will plead not guilty to these charges. I will defeat them in court,” he said. Some in the crowd jeered and chanted “lock him up.” Others shouted support for Stone.

Stone, 66, who has been friends with Trump for three decades, served briefly as a formal adviser to his presidential campaign in 2015 and then remained in contact with Trump and top advisers through the election.

Stone’s indictment was returned by a federal grand jury in Washington under seal Thursday pending his arrest.

U.S. Magistrate Deborah A. Robinson granted the sealing motion after Mueller’s prosecutors stated, “law enforcement believes that publicity resulting from disclosure of the Indictment and related materials on the public record prior to arrest will increase the risk of the defendant fleeing and destroying (or tampering with) evidence.”

UPDATE: After a short court appearance, Stone has been released on $250,000 bond. 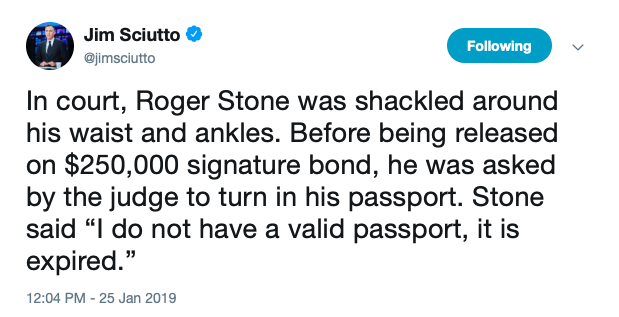 President Trump lashed out on Twitter, grabbing on to a fast-moving right wing conspiracy theory that CNN got a heads-up to be at Stone's home as the arrest was taking place. In fact, CNN's team noticed yesterday's unusual Thursday grand jury hearing and, on its own initiative, decided to see what Stone was up to this morning because Mueller has been questioning his friends and associates for months. 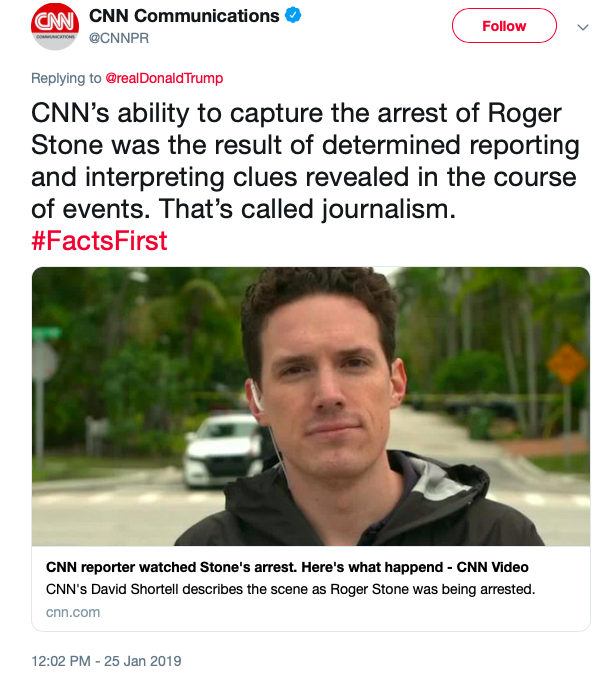 Roger Jason Stone, Jr., 66, of Fort Lauderdale, Florida, was arrested in Fort Lauderdale today following an indictment by a federal grand jury on Jan. 24, 2019, in the District of Columbia. The indictment, which was unsealed upon arrest, contains seven counts: one count of obstruction of an official proceeding, five counts of false statements, and one count of witness tampering.

Stone will make an initial appearance at 11 a.m. before U.S. Magistrate Judge Lurana S. Snow at the federal courthouse in Fort Lauderdale in courtroom 203D.

Court documents can be found at www.justice.gov/sco.

In the court documents, the special counsel's office wrote that after WikiLeaks began releasing internal Democratic National Committee emails in the summer of 2016, an unidentified "senior Trump campaign official was directed to contact Stone about any additional releases and what other damaging information [Wikileaks] had regarding the Clinton Campaign."

"There was no Russian collusion, it's a clear attempt at silencing Roger," Roger Stone's attorney Grant Smith tells ABC News. "This was an investigation they started as about Russian collusion and now they're charging Roger Stone with lying to Congress about something he honestly forgot about, and as Roger has stated publicly before, he will fight the charges," Smith said.

The White House again is distancing itself from the crime.

Mueller's indictment accuses Stone of making false and misleading statements to the House Intelligence Committee, and Rep. Eric Swalwell, a Democrat on the committee, told ABC News Friday he believes the indictment is important because “it shows the Trump Organization was aware of his efforts. It shows there was awareness of Stone’s efforts to get the hacked emails.”

In July, the mercurial Stone told ABC News that he is the unnamed Trump campaign regular who allegedly corresponded with Russian hackers, as described in special counsel Mueller’s July 13 indictment against a dozen Russians intelligence officers, who were posing as a hacker, Guccifer 2.0. The indictment alleges that the 12 Russians engaged in a sustained effort to hack Democrats and aides to Clinton during the 2016 presidential campaign. Stone has dismissed his short Twitter direct message communications with Guccifer 2.0 and denied knowledge that Russian agents were behind the account.

Stone told ABC News in November, “There’s no circumstance under which I bear false witness against President Trump.” 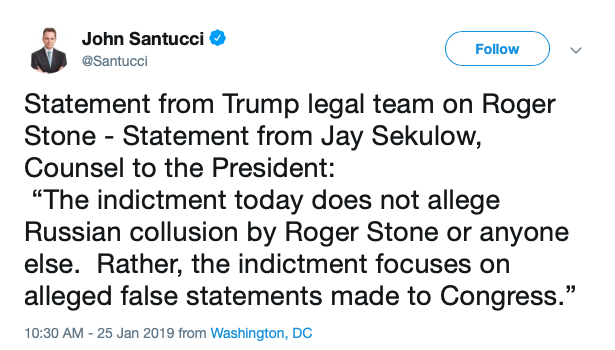 Timeline: The Roger Stone indictment fills in new details about WikiLeaks and the Trump campaign (WaPo)