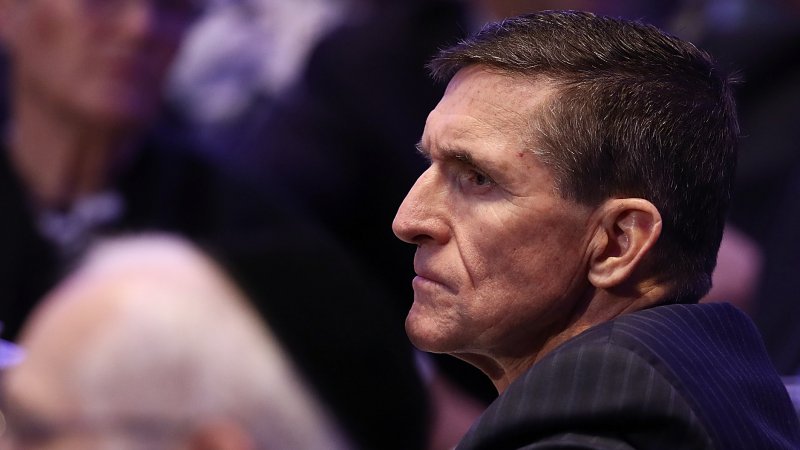 Michael Flynn is President Trump’s former National Security Advisor. He served just 24 days before being forced to resign on February 13, 2017 for misleading Vice President Mike Pence about conversations he had with Russian Ambassador Sergey Kislyak. Flynn’s failure to disclose the truth made him susceptible to blackmail.

Flynn is a former U.S. Army Lieutenant General who spent 33 years in military service and played a key role in helping dismantle insurgent networks in Iraq and Afghanistan. He served two years as the director of the Defense Intelligence Agency under President Obama, but his disorganized and disruptive management style was a misfit for the agency. In 2013, Flynn took a controversial trip to Moscow to speak to members of Russia’s intelligence agency, the G.R.U., about leadership development.

In an interview with the Washington Post in 2016, Flynn told Dana Priest, "I was the first U.S. officer ever allowed inside the headquarters of the GRU [Russian intelligence]. I was able to brief their entire staff. I gave them a leadership OPD. [Professional development class on leadership] and talked a lot about the way the world’s unfolding." Flynn believed that a close relationship with Russia was necessary to fight terrorism. the same interview he said, “I saw the relation with Russia as necessary to the U.S., for the interests of the U.S. . . . anybody that looks on it as anything but a relationship that’s required for mutual supporting interests, including ISIS, … that’s really where I’m at with Russia. We have a problem with radical Islamism and I actually think that we could work together with them against this enemy.”

In late 2013, James Clapper, the Director of National Intelligence, and Michael Vickers, the Under-Secretary of Defense for Intelligence, told Flynn his tenure would be limited to two years, and Flynn reluctantly accepted early retirement on August 7, 2014.

After his retirement, Flynn opened a private intelligence firm, Flynn Intel Group, and collected a range of controversial clients. In December 2015, Flynn traveled to Moscow to give a paid speech and attend a fancy anniversary party for the Kremlin-controlled Russian Television (RT) network. In a widely circulated photo, Flynn is seated at dinner next to President Vladimir Putin.

When filling out ethics forms during the National Security Advisor vetting process, Flynn omitted the $45,000 he made for his RT speech as well as other compensation collected from foreign entities, including several Russian businesses, for unspecified consulting services.

Flynn says he first met Donald Trump in the summer of 2015 and drew attention to himself during a speech in support of the candidate at the Republican National Convention a year later when he led chants of ”Lock her up” aimed at Hillary Clinton.

President Trump has been unflinchingly loyal to Flynn, even ignoring a warning from President Obama two days after the 2016 election that Trump should not add Flynn to his national security team.

On December 29, 2016, the Obama administration expelled 35 Russian diplomats from the United States and issued other sanctions on Russia for its election interference. Around the same time, Flynn held several phone calls with Russian Ambassador Sergey Kislyak. Both Press Secretary Sean Spicer and Vice President Mike Pence defended Flynn’s communications, insisting his calls had nothing to do with President Obama’s actions. However, when Putin failed to retaliate for the sanctions, a move completely out of character, the FBI grew suspicious.

When President Trump fired FBI Director James Comey, Pence insisted Trump was acting solely on Attorney General Jeff Sessions’ and Deputy Attorney General Rod Rosenstein’s recommendation and doing what was in the best interest of the American people. The next day, Trump admitted to Lester Holt he dismissed Comey because of the Russia investigation. Then on September 1, 2017, The New York Times reported Special Counsel Robert Mueller had obtained President Trump’s first draft of the dismissal letter he wanted to send to Comey. White House Counsel Don McGahn blocked the letter because its “angry, meandering tone was problematic” and because it made references to private conversations Trump and Comey had about whether the President personally was a subject of the Russia investigation. According to the New York Times’ report, Trump and top political advisor Stephen Miller drafted the letter over the weekend and then handed a copy of that draft on Monday May 8th to senior White House officials in the Oval Office, including Vice President Pence. Trump fired Comey the next day using the amended excuse, but having seen the letter, Pence would have known Trump’s original rationale.

As proof mounted that Flynn had lied and it was becoming increasingly difficult to defend him, the White House tamped down its public support of Trump’s National Security Advisor. But even after Flynn resigned, President Trump continued to support him, even telling then-FBI director James Comey he hoped the director could see his way to letting the Flynn matter go.