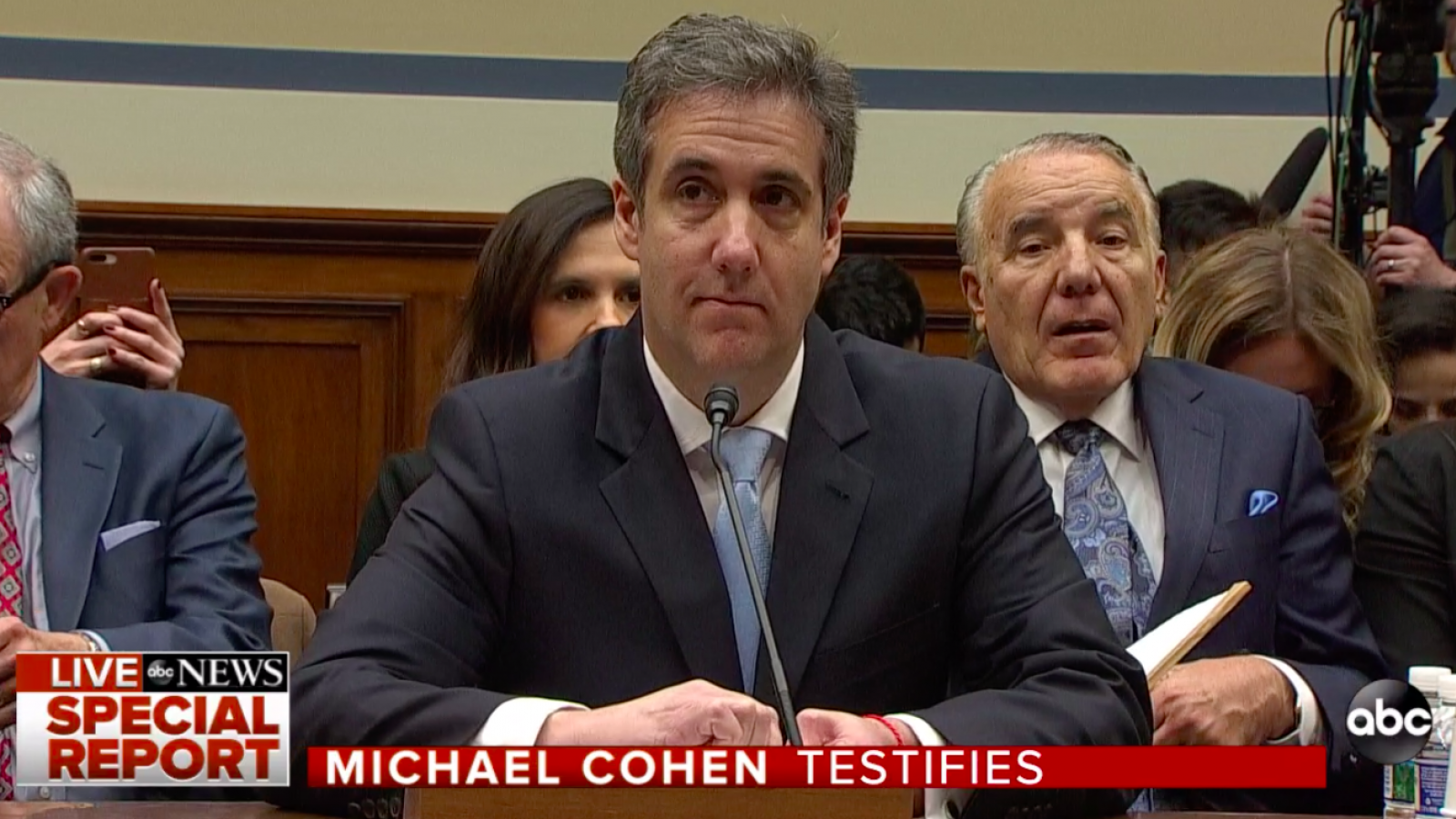 UPDATE: The hearing begins with Rep. Mark Meadows (R-NC) and Ranking Member Jim Jordan (R-OH) arguing the committee should postpone proceedings because it did not receive Cohen's testimony until late last night. Chairman Elijah Cummings (D-MD), after several procedural votes, declares the public has the right to hear from Cohen and continues with his opening remarks.

Rep. Cummings says the committee will not restrict all questions related to Russia.

Ranking member Jim Jordan (R-OH) launches into a rant about how Lanny Davis orchestrated this whole hearing and says no other committee would hold this hearing.

Cummings swears in Cohen, and Cohen begins his opening remarks.

SEE: Documents Michael Cohen will present to back up his testimony to Congress (CNN)

Michael Cohen will testify before the House Oversight and Reform Committee at 10am ET Wednesday, and according to his prepared opening remarks, Donald Trump knew in advance WikiLeaks had stolen emails and was going to make them public.

"He was a presidential candidate who knew that Roger Stone was talking with Julian Assange about a WikiLeaks drop of Democratic National Committee emails."

Cohen continues to apologize for his past lies and explains President Trump was, in fact, very much aware of his ongoing Trump Tower Moscow negotiations.

"The last time I appeared before Congress, I came to protect Mr. Trump.

Today, I’m here to tell the truth about Mr. Trump.

Mr. Trump did not directly tell me to lie to Congress. That’s not how he operates.

In conversations we had during the campaign, at the same time I was actively negotiating in Russia for him, he would look me in the eye and tell me there’s no business in Russia and then go out and lie to the American people by saying the same thing. In his way, he was telling me to lie.

There were at least a half-dozen times between the Iowa Caucus in January 2016 and the end of June when he would ask me “How’s it going in Russia?” – referring to the Moscow Tower project.

You need to know that Mr. Trump’s personal lawyers reviewed and edited my statement to Congress about the timing of the Moscow Tower negotiations before I gave it.

After explaining he sees himself as a loyal, generous, and compassionate person, Cohen admits he made a huge mistake being loyal to the president.

"Yet, last fall I pled guilty in federal court to felonies for the benefit of, at the direction of, and in coordination with Individual #1.

For the record: Individual #1 is President Donald J. Trump.

For that reason, I have come here to apologize to my family, to the government, and to the American people."

He then moves on to describe President Trump and explains how, exactly, he knows the president knew WikiLeaks had and was going to release the Democratic National Committee's stolen emails.

"Donald Trump is a man who ran for office to make his brand great, not to make our country great. He had no desire or intention to lead this nation – only to market himself and to build his wealth and power. Mr. Trump would often say, this campaign was going to be the “greatest infomercial in political history.”

A lot of people have asked me about whether Mr. Trump knew about the release of the hacked Democratic National Committee emails ahead of time. The answer is yes.

As I earlier stated, Mr. Trump knew from Roger Stone in advance about the WikiLeaks drop of emails.

In July 2016, days before the Democratic convention, I was in Mr. Trump’s office when his secretary announced that Roger Stone was on the phone. Mr. Trump put Mr. Stone on the speakerphone. Mr. Stone told Mr. Trump that he had just gotten off the phone with Julian Assange and that Mr. Assange told Mr. Stone that, within a couple of days, there would be a massive dump of emails that would damage Hillary Clinton’s campaign.

Mr. Trump responded by stating to the effect of “wouldn’t that be great.”

And while Cohen does not have proof Trump knew about the June 9, 2016 Trump Tower meeting in advance, he shares what he witnessed that leads him to suspect the campaign did conspire with Russia.

"Questions have been raised about whether I know of direct evidence that Mr. Trump or his campaign colluded with Russia. I do not. I want to be clear. But, I have my suspicions.

Sometime in the summer of 2017, I read all over the media that there had been a meeting in Trump Tower in June 2016 involving Don Jr. and others from the campaign with Russians, including a representative of the Russian government, and an email setting up the meeting with the subject line, “Dirt on Hillary Clinton.” Something clicked in my mind.

I remember being in the room with Mr. Trump, probably in early June 2016, when something peculiar happened. Don Jr. came into the room and walked behind his father’s desk – which in itself was unusual. People didn’t just walk behind Mr. Trump’s desk to talk to him. I recalled Don Jr. leaning over to his father and speaking in a low voice, which I could clearly hear, and saying: “The meeting is all set.” I remember Mr. Trump saying, “Ok good … let me know.”

What struck me as I looked back and thought about that exchange between Don Jr. and his father was, first, that Mr. Trump had frequently told me and others that his son Don Jr. had the worst judgment of anyone in the world. And also, that Don Jr. would never set up any meeting of any significance alone – and certainly not without checking with his father.

I also knew that nothing went on in Trump world, especially the campaign, without Mr. Trump’s knowledge and approval. So, I concluded that Don Jr. was referring to that June 2016 Trump Tower meeting about dirt on Hillary with the Russian representative when he walked behind his dad’s desk that day — and that Mr. Trump knew that was the meeting Don Jr. was talking about when he said, “That’s good … let me know.”

Mr. Cohen will chronicle less legally dubious but unflattering encounters, as well, according to the prepared remarks. He plans to say that as a candidate, Mr. Trump directed him to write letters to his high school, college and other entities threatening them not to release transcripts of his standardized test scores.

He will claim that Mr. Trump asked him to put off reporters asking about his medical deferment from the Vietnam draft, telling Mr. Cohen privately that there were no medical records of the bone spurs that he has said affected his heel.

“You think I’m stupid? I wasn’t going to Vietnam,” Mr. Trump said, according to Mr. Cohen.

And he will assert that “it was my experience” that Mr. Trump inflated his wealth to garner attention, and deflated his assets to lower his tax bills.

Mr. Cohen plans to describe his former boss as a jumble of conflicts, but one who is ultimately a dishonorable person.