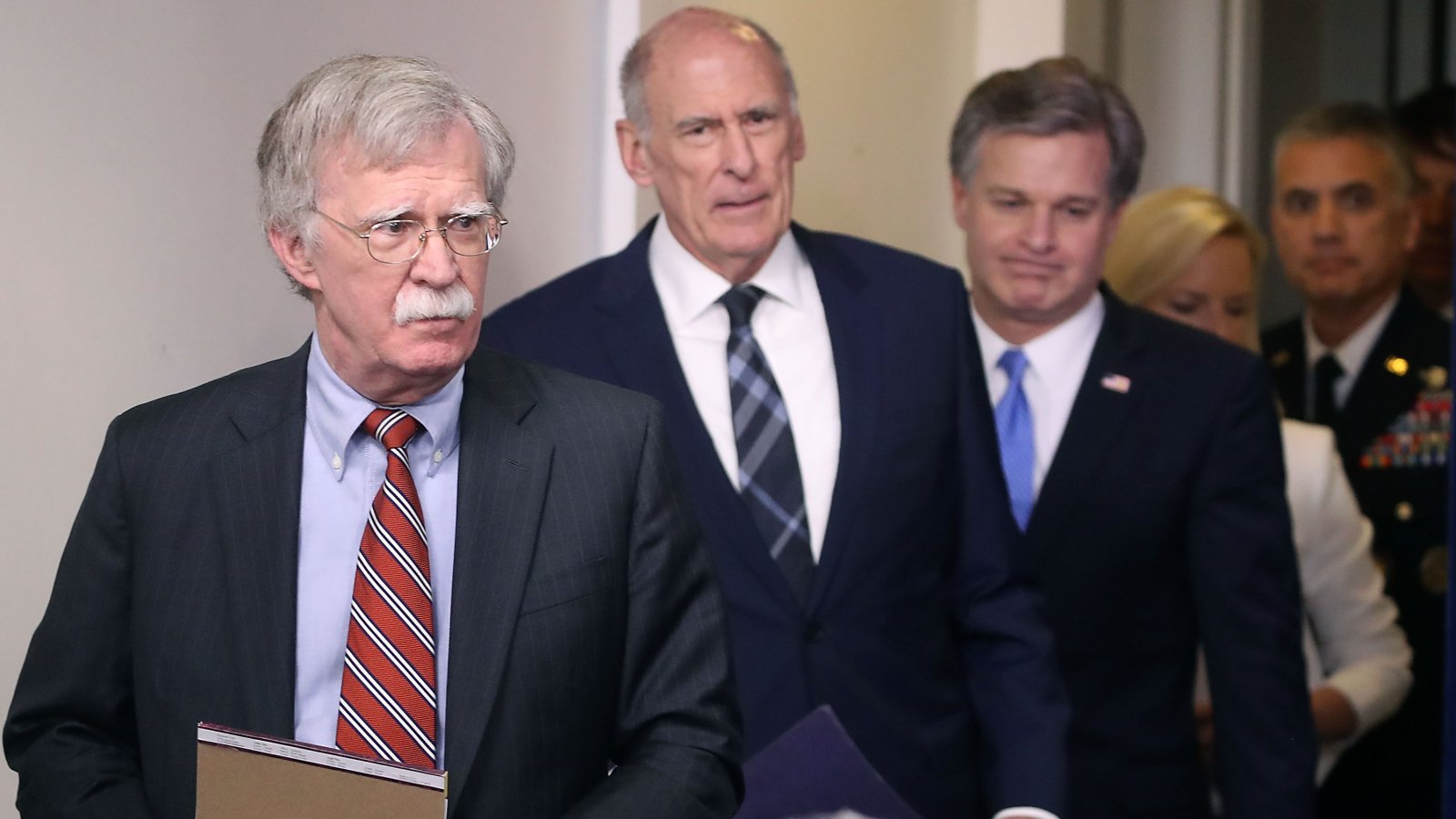 The agency leads spoke of the ongoing threat of Russian interference and what each is doing - mostly in general terms - to monitor malign activity and respond, if needed. However, Ambassador Bolton, who is closest to President Trump, had little to say about the disconnect between what officials were saying at the podium and what the president says about Russia and its attacks on our democracy.

Bolton speaks first, saying pressure from Congress was the impetus for this briefing. He says senior staff meets on the issue regularly and says the president has chaired the two national Security Council meetings on the matter. He introduces the other agency heads.

DNI Coats says the intelligence community is ready to assess threats against the U.S. and that the president has specifically has asked them to make eleciton meddling and security a top priority. The intelligence community still is concerned about the threats to upcoming elections. Coats says Russia still is engaging in "pervasive messaging campaign to try to weaken and divide the United States." The Russians still are trying to hack into systems and steal information from political candidates. Coats says he is committed to make sure agencies are working together and integrated. The ODNI is covering collection, analysis, reporting, education, and partnerships to provide best threat assessments to government and the public.

Sec. Nielsen says, "Our democracy itself is in the crosshairs. Free and fair elections are the cornerstone of our democracy." She says DHS has and continues to work closely with states to identify weaknesses in election systems.

Director Wray says he set up a new foreign influence task force when he took over the FBI, designed to root out and respond to foreign influence operations. He names some of the activities they have found: targeting U.S. officials through traditional intelligence tradecraft, voter suppression and illegal campaign funding, cyberattacks, and other overt and covert influence operations to shape news and information.

The FBI has three pillars to its operation strategy:

Wray: "Russia continues to engage in malign influence operations to this day."

Gen. Nakasone says Department of Defense is providing intelligence, information, support, and technical expertise to DHS for use by state and local officials. DOD also is providing leads to FBI. Cyber Command and the NSA are tracking foreign cyber adversaries and are prepared to conduct operations against those actors. "Our forces are well-trained, ready, and very capable."

The Q and A begins.

Q: What is your belief of Russian government involvement in meddling 2016, and if Russia continues, does that mean nothing much came of meeting with Putin?

Coats: The ICA was correct as to what happened in 2016. We are making this a top priority so it doesn't happen again. Our focus here today is to say the threat is real and continuing, and we are doing everything we can to have an election the American people can have trust in.

Both rogue Russian individuals and the Kremlin, through various means, are operating to drive a wedge and undermine our democratic values.

Q: Why would the American people believe in the FBI when the American president calls the investigation a hoax and the press secretary yesterday said there was a lot of corruption in the FBI?

Wray: I can assure the American people that the men and women of the FBI are going to follow our oaths and do our jobs.

Coats: It is not the robust campaign we assessed in 2016. We have not seen that kind of robust effort from them, so far. We are only one keyboard click away from finding out something that we haven't seen up to this point in time.

Coats: Russians looking for every opportunity, regardless of party, to continue to undermine our fundamental values.

Q: In run-up to Helsinki, officials said Trump would raise the issue of election meddling with Putin and he didn't. How do you explain the disconnect between when the president says and what his advisors say about this issue?

Coats: I am not in the position to understand fully or talk about what happened in Helsinki.

Q: At the press conference, the president didn't highlight any of the malign activities that you have. Should the Americans believe that he is listening to you or going his own way?

Bolton: I think the president has made it abundantly clear to everybody who has responsibility in this area the that he cares deeply about it and he expects them to do their jobs to their fullest ability and that he supports them fully.

Q: Facebook shut down 32 accounts. Is that a large amount? Tip of iceberg? How much have social media companies progressed - or not - from 2016 in identifying threat?

Wray: We need to have a public-private partnership to address this type of threat. Social media companies have a role in policing their own platforms. We are sharing actionable intelligence with them in a way that wasn't happening before, and they are sharing information back with us. I do think progress is being made.

Q: Why did you close Russian consulates in [tech hubs] Seattle and San Francisco? What happened there?

Bolton: Expelling individuals was to send signal to Russia that conducting chemical attack was unacceptable.

Q: Meddling campaigns fall into 2 categories - information and physical interference into machinery. Can you guys describe what you are seeing now in those areas? Is one more concerning than the other? Are there specific threats? How should Americans process that?

Wray: In the context of 2018, we are not yet seeing the same kind of efforts to target election infrastructure, but we are seeing the malign influence operations, information warfare. Any moment is just a moment before the dial can be turned up one.

Nielsen: DHS is focused on election infrastructure. We are encouraging states to have the ability to audit the vote.

Q: Who has been targeted?

Coats: Not in a position to release those names.

Q: Would you support sanctions?

Coats: We already have sanctions in place. I would support any collective effort to send the signal to Russia that there is a price to pay for what they're doing. If we want to have any kind of relationship whatsoever, dealing with things of mutual interest, the Russians have to stop doing what they're doing or it's simply not going to happen.

Q: General, have you been authorized to conduct any offensive cyber operations?

Nakasone: My guidance is very clear that we are not going to accept any meddling in the elections.