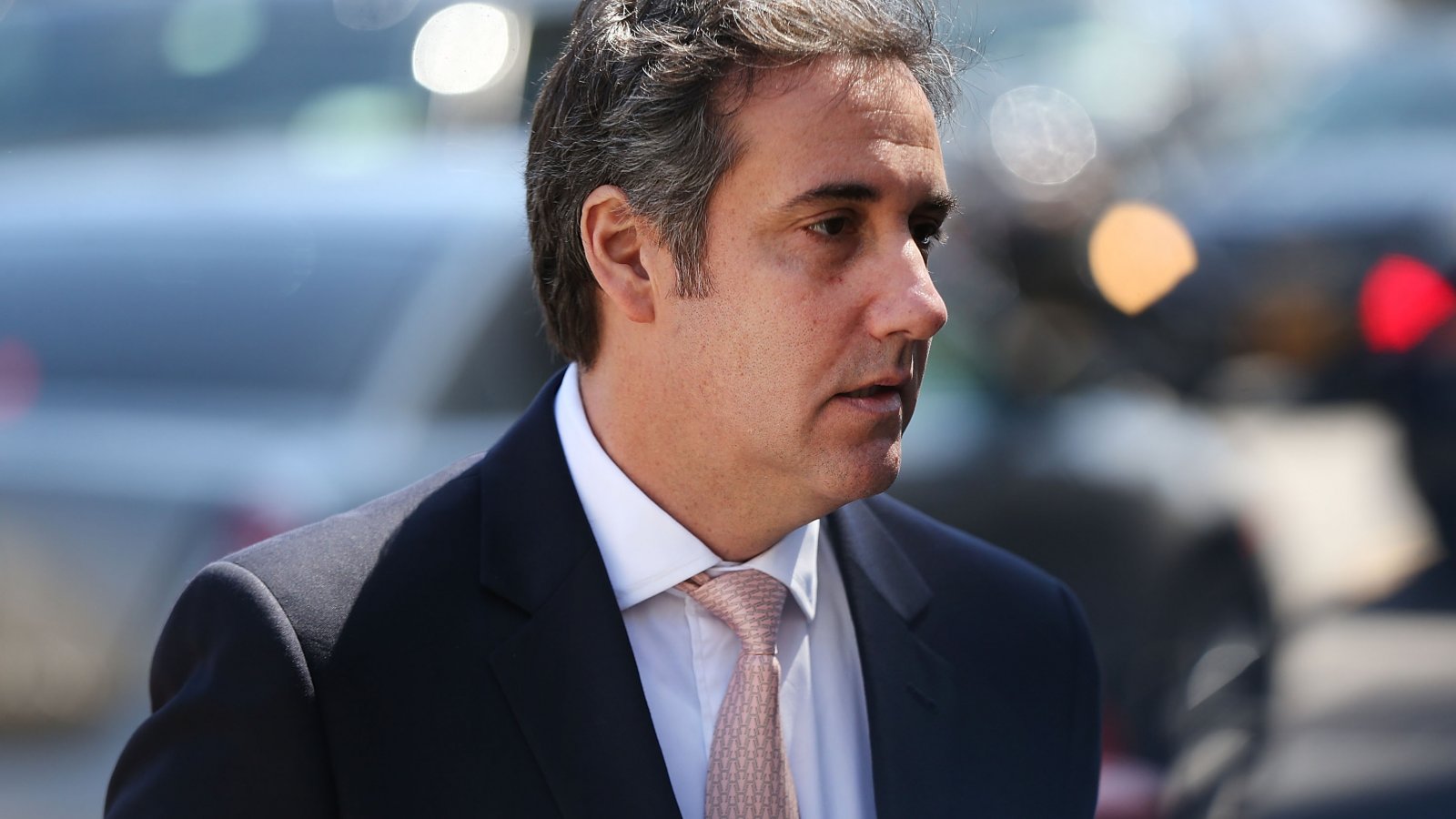 On Wednesday, more information emerged, including confirmation from the named contributing companies that much of Avenatti's information was correct.

The two entities pushing back, however, happen to be Columbus Nova – on its connection to Viktor Vekselberg – and Cohen's attorney – on the accuracy of Avenatti's document.

It was revealed on Tuesday that another company that paid Cohen was Columbus Nova LLC, an investment firm run by Andrew Intrater that is linked to Renova Group, a company owned by Russian oligarch Viktor Vekselberg. Vekselberg, a one-time business associate of Commerce Secretary Wilbur Ross, was sanctioned last month by the Trump administration as retaliation for Russian election meddling.

Columbus Nova's attorney, Richard Owens of Latham & Watkins, acknowledged the company hired Cohen "as a business consultant regarding potential sources of capital and potential investments in real estate and other ventures" in a statement provided to BuzzFeed News on Tuesday night. Owens also said that Columbus Nova "is a management company solely owned and controlled by Americans" and that any claims that Vekselberg "used Columbus Nova as a conduit for payments to Michael Cohen are false." Owens said that Vekselberg was not involved in the decision to hire Cohen and had not "provided funding" for his hiring.

By Wednesday morning, that statement appeared on the front page of Columbus Nova's website, along with two additional paragraphs further detailing Columbus Nova's explanation of its relationship with Vekselberg's company, Renova Group.

Meanwhile, Intrater's biography — which had been available online on Tuesday evening, according to the Internet Archive's Wayback Machine — was not available Wednesday.

In the now-removed biography, it described Columbus Nova as "the US investment vehicle for the Renova Group" and noted that Intrater "is a former Director and current Member of the Executive Board of Renova Group." A 2017 story in Mother Jones also noted an SEC filing that described Intrater as Vekselberg's cousin.

A review of public election filings shows that the CEO of Columbus Nova, Andrew Intrater, made several political donations over the past two years.

Vekselberg attended Trump’s inauguration with Andrew Intrater, his cousin and the head of Columbus Nova. A person familiar with their attendance at the inauguration said Cohen, Intrater and Vekselberg were seen together.

It is unclear why Columbus Nova, an 18-year-old investment management firm with an estimated $200-$300 million in its portfolio, would need Michael Cohen's consulting services for "potential sources of capital and potential investments in real estate and other ventures."

Columbus Nova, a company whose U.S. chief executive, Andrew Intrater, and Russian investment partner Viktor Vekselberg have both reportedly been interviewed by special counsel Robert S. Mueller III’s team, is listed as the registrant behind a handful of domains for websites named after the alt-right that were created during the 2016 election.

It is unclear if any of these websites were launched or ever hosted content.

These sites include Alt-right.co, Alternate-right.com, Alternate-rt.com, Alt-rite.com, and other similar combinations, which were all registered in the two days following a speech given by then candidate Hillary Clinton in August 2016 in which she excoriated the far-right movement known for its extremist, racist, anti-Semitic and sexist viewpoints. The sites are not currently operational.

Meanwhile, Michael Cohen's attorney is contesting a few small payments included in the list of alleged Cohen LLC transactions, but he is not saying the largest and most concerning are wrong.

In a court filing on Wednesday, Cohen's attorney said some of the transactions attributed to Cohen were actually tied to other people with the same name.

"This document is concerning for a number of reasons, including the number of blatantly incorrect statements it contains," Cohen attorney Stephen Ryan wrote in a 24-page complaint letter to a federal judge.

In a statement to NBC News, [Avenatti, in response,] said: "Let me get this straight. The best they have to try to undercut our report is pointing to a few small transactions with minimal dollar amounts? Are you kidding me? Why don’t they address the four 3,000-pound elephants in the room? Namely Columbus Nova, Novartis, AT&T and Korea Aerospace Industries?"

CNN is providing some more background on Cohen's operation, reporting he worked hard to sell himself as the consummate Trump insider after his longtime boss won the presidency.

According to multiple people familiar with Cohen's conduct following the election, he aggressively pitched himself to potential clients, reminding them of his proximity to the most powerful man in the world. Those efforts landed Cohen lucrative consulting deals. New reporting this week revealed that in the months following the 2016 election, Cohen received hundreds of thousands of dollars from powerful entities based in and outside of the United States.

"I don't know who's been representing you, but you should fire them all. I'm the guy you should hire. I'm closest to the President. I'm his personal lawyer," was how one GOP strategist described Cohen's sales pitch.

Pharmaceutical giant Novartis took the bait and reportedly signed a $1.2 million contract with Cohen in February 2017 before ever meeting him.

According to the source, company officials had one meeting with Cohen in March 2017 and decided that he would not be able to provide the access they desired. There would be no other meetings with Cohen, but Novartis chose to pay out the entirety of Cohen's contract anyway -- $100,000 per month, for a total of $1.2 million.

AT&T admitted the payments to Cohen in a statement Tuesday. In the statement, the telecom giant said it paid the consulting firm "to provide insights into understanding the new administration." It declined to say how much it paid Cohen, but said it began working with him in early 2017 and its contract ended in 2017.

AT&T may have paid Cohen's company as much as $600,000 last year, according to information first reported by Reuters.  A source told Reuters the company had a year-long contract with Cohen.

In partnership with US defense giant Lockheed Martin, the company is currently vying for a lucrative contract with the United States Air Force, which plans to buy approximately 350 new training jets.

"Korea Aerospace Industries, LTD. received legal advice on the Cost Accounting Standards regulation from Essential Consultants, LLC through a contracted deal," a spokesperson said. "The payment was all legal based on the contract. KAI is doing its best to comply with accounting regulations that are up to global standards."

The spokesperson clarified that the company did not have direct contact with Cohen at the time, and that the "deal was done by someone else." It was not immediately clear who this "someone else" was.

Left unanswered is why major corporations paid so much money to a man with no expertise in their respective fields, and why, in the case of Novartis, a company would be willing to give up more than a million dollars without a fight.

CNN reports that Trump and Cohen were close during the time when Cohen's LLC started receiving payments.

During the transition, Cohen worked out of his office in Trump Tower in Manhattan, where his desk was a three-minute walk from the then-President-elect's office on a nearby floor. Cohen and Trump spoke "multiple times a day" during the transition, this person estimated -- it was during this period that the payments from major corporations first started to flow into Cohen's Essential Consultants bank account.

Citizens for Responsibility and Ethics in Washington (CREW), a government watchdog, sent a letter to the Office of Government Ethics in March asking for an inquiry into whether President Trump had an interest in Cohen's company:

Citizens for Responsibility and Ethics in Washington (“CREW”) respectfully requests that the Office of Government Ethics (“OGE”) exercise its oversight responsibilities to determine whether President Donald J. Trump held a beneficial interest in a limited liability company (“LLC”) that was used by his personal lawyer to make a surreptitious payment to a third party in the weeks before the 2016 presidential election. If he did, the LLC should have been reported as an “interest in property” on the public financial disclosure report (“OGE 278”) President Trump filed with OGE in June 2017.

CREW's Executive Director says in light of the news Cohen's LLC took in $4.4 million, knowing the president's involvement – if any – is even more important.

AT&T: We gave information to Mueller regarding payments to Trump lawyer (Dallas News)