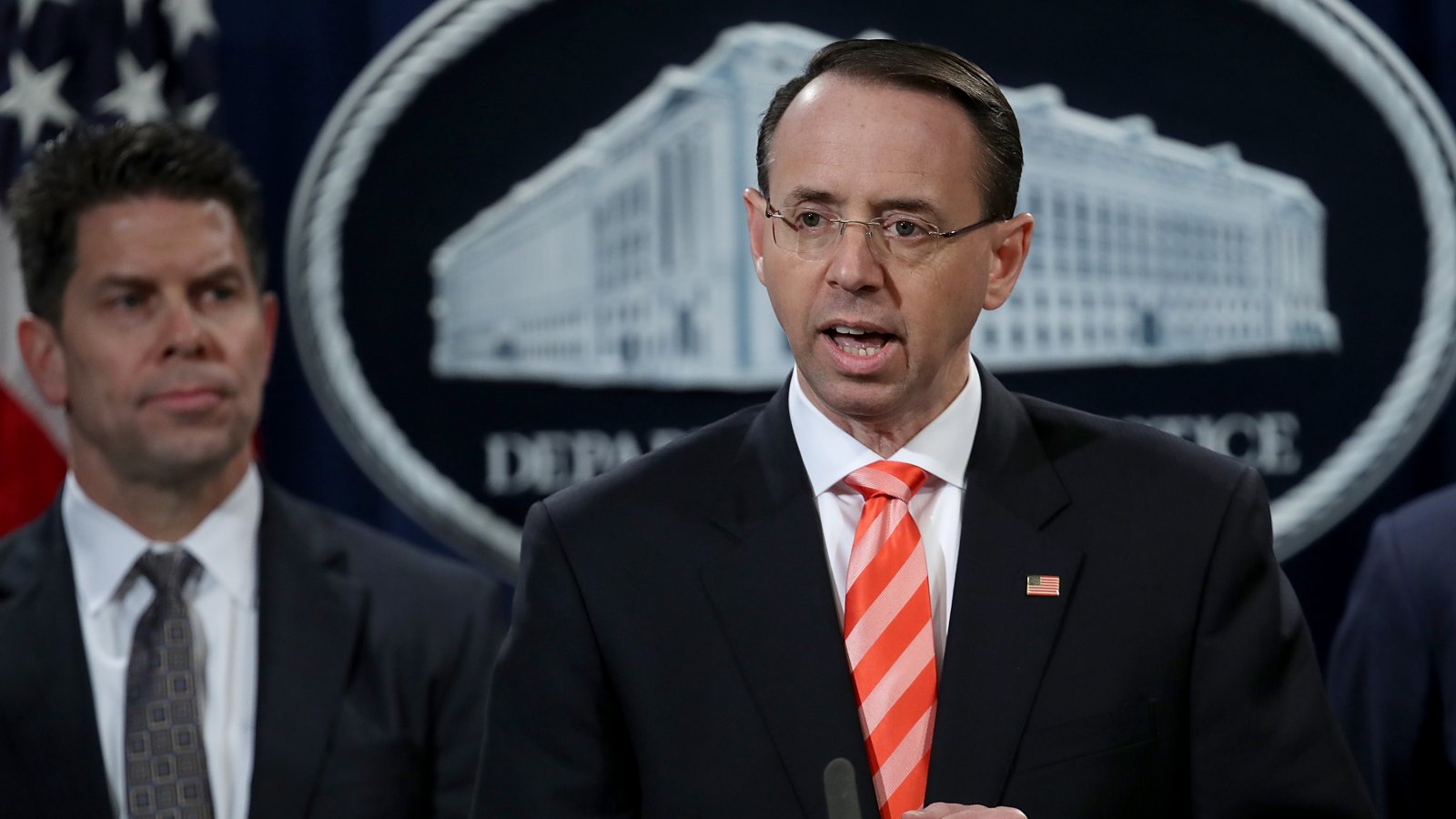 All 12 defendants are members of the GRU, a Russian federation intelligence agency within the main intelligence directorate of the Russian military, who were acting in "their official capacities."

The Justice Department says the hacking targeted Clinton's campaign, Democratic National Committee and the Democratic Congressional Campaign Committee, with the intention to "release that information on the internet under the names DCLeaks and Guccifer 2.0 and through another entity."

Deputy Attorney General Rod Rosenstein said the indictment does not name any American citizen, but told reporters that defendants "corresponded with several Americans during the course of the conspiracy through the internet."

"Russian GRU officers hacked the website of a state election board and stole information about 500,000 voters," Rosenstein said. "They also hacked into computers of a company that supplied software used to verify voter registration information."

"The defendants worked for two units of the GRU that "engaged in active cyber operations to interfere in the 2016 presidential elections," Rosenstein said. One unit stole information using spearfishing schemes and hacked into computer networks where they "installed malicious software that allowed them to spy on users and capture keystrokes, take screenshots and exfiltrate or remove data from those computers."

In 2016, officials in Unit 26165 began spearphishing volunteers and employees of the presidential campaign of Hillary Clinton, including the campaign’s chairman. Through that process, officials in this unit were able to steal the usernames and passwords for numerous individuals and use those credentials to steal email content and hack into other computers. They also were able to hack into the computer networks of the Democratic Congressional Campaign Committee (DCCC) and the Democratic National Committee (DNC) through these spearphishing techniques to steal emails and documents, covertly monitor the computer activity of dozens of employees, and implant hundreds of files of malicious computer code to steal passwords and maintain access to these networks.

The officials in Unit 26165 coordinated with officials in Unit 74455 to plan the release of the stolen documents for the purpose of interfering with the 2016 presidential election. Defendants registered the domain DCLeaks.com and later staged the release of thousands of stolen emails and documents through that website. On the website, defendants claimed to be “American hacktivists” and used Facebook accounts with fictitious names and Twitter accounts to promote the website.  After public accusations that the Russian government was behind the hacking of DNC and DCCC computers, defendants created the fictitious persona Guccifer 2.0. On the evening of June 15, 2016 between 4:19PM and 4:56PM, defendants used their Moscow-based server to search for a series of English words and phrases that later appeared in Guccifer 2.0’s first blog post falsely claiming to be a lone Romanian hacker responsible for the hacks in the hopes of undermining the allegations of Russian involvement.

Members of Unit 74455 also conspired to hack into the computers of state boards of elections, secretaries of state, and US companies that supplied software and other technology related to the administration of elections to steal voter data stored on those computers.

To avoid detection, defendants used false identities while using a network of computers located around the world, including the United States, paid for with cryptocurrency through mining bitcoin and other means intended to obscure the origin of the funds. This funding structure supported their efforts to buy key accounts, servers, and domains. For example, the same bitcoin mining operation that funded the registration payment for DCLeaks.com also funded the servers and domains used in the spearphishing campaign.

The indictments are part of the special counsel’s investigation into Russia’s interference in the 2016 presidential campaign.

Russia has denied that its government had any role in the hacks that preceded the presidential election. Mr. Rosenstein discussed the charges during a news conference at the Justice Department in Washington as Mr. Trump met with Queen Elizabeth in Britain, creating a bizarre split screen on cable news of presidential pomp and an ongoing investigation that has ensnared some of the president’s aides.

The special counsel, Robert S. Mueller III, has filed more than 100 criminal counts against 32 people and three companies. Among the people previously charged are fourteen Russians and three Trump associates who have already pleaded guilty.