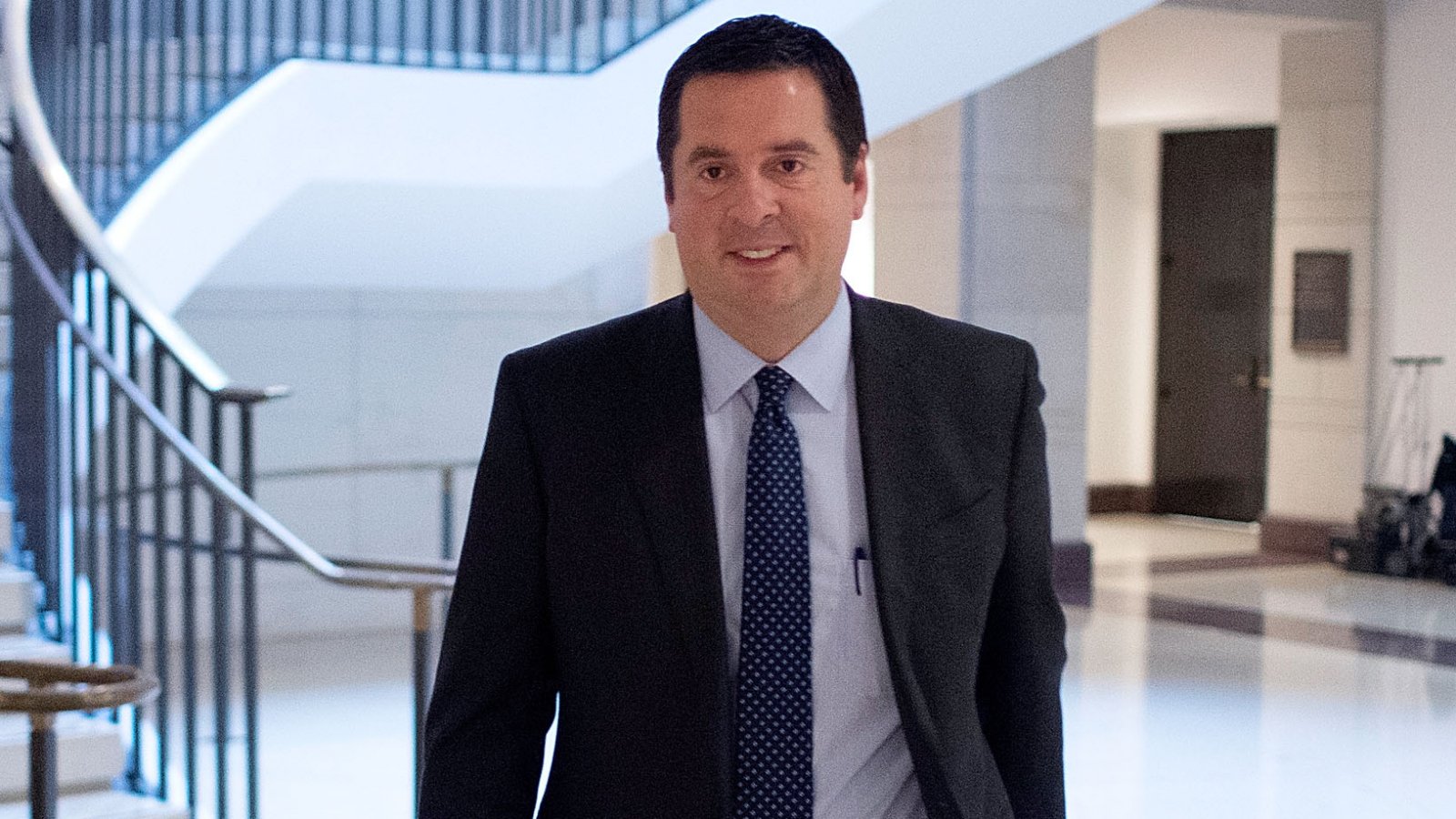 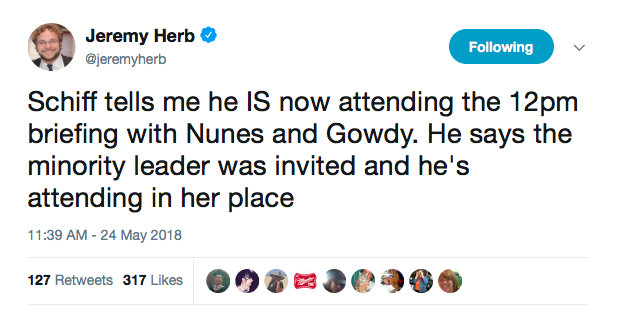 UPDATE 2: The DOJ says there will be two separate meetings Thursday. One is scheduled for 12pm ET, and another is set for 2pm ET.

White House Chief of Staff John Kelly now appears to be attending both briefings whereas he was not expected to stay in the room, and Deputy Attorney General Rod Rosenstein is listed instead of Ed O'Callaghan. 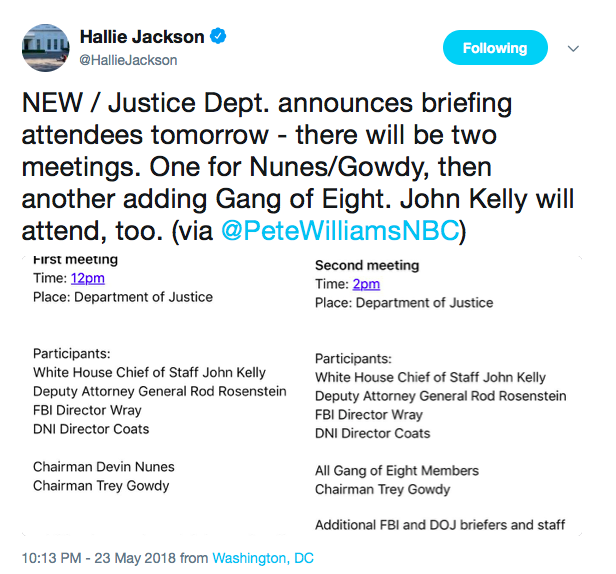 UPDATE: House Intelligence Committee Ranking Member Adam Schiff (D-CA) said on MSNBC Wednesday evening he had been told by the head of an intelligence agency that the Thursday meeting would be bipartisan at the Gang of 8 level and that the White House would open the meeting and then leave the room.

After a day of requests and speculation, CNN and ABC News report the Department of Justice meeting with Trump transition team member and House Intelligence Committee Chairman Rep. Devin Nunes (R-CA) and House Oversight Committee Chairman Trey Gowdy (R-SC) will go on as planned Thursday without any Democrats present.

The "Gang of Eight" refers to the two Democratic and Republican leaders of the House and the Senate, as well as the chairmen and top Democrats of the two intelligence committees.

Senate and House Minority Leaders Chuck Schumer (D-NY) and Nancy Pelosi (D-CA) sent a joint letter to Deputy Attorney General Rod Rosenstein and FBI Director Christopher Wray urging them either to cancel the meeting or to include the Gang of Eight should they insist on proceeding.

This meeting is completely improper in its proposed form and would set a damaging precedent for your institutions and the rule of law.  We can think of no legitimate oversight justification for the ex parte dissemination - at the direction of the president - of investigative information to the president's staunchest defenders in Congress and, ultimately, to the president's legal defense team. We understand that other Senate and House Republicans are now seeking to attend, adding to the spectacle of this ill-considered and overtly partisan event.

Such a meeting would be highly irregular and inappropriate during any open criminal or counterintelligence investigation, much less one involving the president.  At a barest minimum, it creates the appearance of an unseemly opportunity for the president and his enablers to prematurely access investigatory information and selectively leak national security secrets, for the purpose of publicly distorting the facts in this case.

[W]e urge you to reconsider holding this meeting.  However, if you have determined in your best judgment that Justice Department participation in the meeting is the only way to prevent this situation from devolving into an outright constitutional crisis, then we believe you must insist on the only appropriate mechanism for highly sensitive briefings that might implicate intelligence sources and methods - a bipartisan Gang of Eight briefing that involves congressional leadership from both chambers.

It appeared at various points throughout the day Wednesday that the meeting might include additional participants. As Senator Schumer and Rep. Pelosi referenced, Republican Senators requested an invitation.

"If this kind of discussion is going to take place, we have a process — it's called the Gang of Eight," Warner said Wednesday. "My hope is that any such briefing needs to bipartisan, and my hope and prayer is that the FBI or the Department of Justice would not in any way be forced to reveal confidential information that would go against 75 years of practice."

However, the White House ultimately decided to plan the second, delayed, separate meeting instead.

Surprisingly, staunch Trump supporter Rep. Matt Gaetz (R-FL) said Democrats "definitely should have been invited" to Thursday's meeting, and fellow Trump supporter Rep. Mark Meadows (R-NC) said he would be okay with Democrats participating. But Meadows' concession came in the midst of remarks indicating Trump allies intend to keep up their attack on the DOJ.

"Going to a briefing without seeing the documents," he added, "is worthless."

Pressed on how he knows DOJ won't share the information Republicans have asked for, Meadows paused at length and then said he couldn't comment. He later added it was based on "rhetoric" and recent history. Several other House GOP lawmakers expressed similar pessimism that DOJ would share the desired "documents."

The early resignation from Trump's staunchest Capitol Hill backers suggests GOP lawmakers are preparing for another round of conflict and confrontation with the Justice Department, regardless of what the briefing provides.

Meadows, who speaks frequently with Trump, said he's comfortable with Democrats attending the meeting and would encourage their inclusion. But he called it a futile exercise because there's little chance DOJ will be forthcoming.

"It is the most frustrating thing because of the doublespeak — yes you can quote me — the doublespeak that we get out of the DOJ about being willing to help when they don’t really have any intention," he said.

Meadows said holding top DOJ officials in contempt of Congress or revisiting a debate over impeaching them "should be" on the table if the department doesn't provide information.